I enjoyed this movie.

I would really recommend seeing this while it’s in theatres because of the special effects. The plot is pretty average, but the talent of the actors help get you to that emotional investment needed to keep you interested.

It would be a waste to spend time analyzing this film. It’s pretty. It’s fun. It’s the HP world. : D

Review: Fantastic Beasts and Where to Find Them

This may have actually been the “on repeat” from August…or September…or October. Who fucking knows; life has been wild lately.

On the surface, this track has a lot of the acid-dripping markers of a typical Animal Collective scream-tinged song BUT there is actually a coherent storyline, or rather, picture being painted. If you cruise YouTube for live versions of Avey Tare, he is clearly behind most of the manic-anxious-obsessive/nostalgic themes (and it’s really obvious that album production involves a lot of taking his wild roars down a notch or five). Incidentally his lyrics are usually the ones that make any fucking sense at all. *heart*

There is a lot of juxtaposition happening between the bright electronic loops and steel drum parts and the very tangible bitter surrender to the current-of-life in lines like “you find out you can’t ask a baby to cry.” Deep harmonizing chords fall just a split second before each measure’s downbeat which give the whole song a sort of sticky feeling; like your brain is trudging through honey. So while one part of you is trying to be all drowning-in-sunshine, the other half is being carried non-stop by the interplay of the vocal melody and the bright counter melody. All of this comes with a light sprinkle of baroque-esque keyboard licks. By the time you get to the screamy “ya-dah, ya-dahs,” it feels like this cathartic release to the endless tide pushing you through the song.

Not unlike what I imagine it would feel like to wake up one day, 33, making decisions based on money rather than interest, feeling kinda achy, and exasperated that little Timmy has once again woken you up at 6am on a Saturday.

Every year the hubby and I watch a thoroughly depressing and/or hopeless film on Thanksgiving to underscore the “you need to be grateful” concept. It works. Embrace of the Serpent directed by Ciro Guerra was up to bat this year.

The cinematography in this film was excellent. Filming in black and white allows you to see the care taken in each shot. I also loved the recurring shots of the roaring river, which is like the life-force of the jungle.

This film offers a lot to swallow in terms of colonialism, indigenous rights and cultural development, and how people of modernity can or cannot return to the earth. I’m still processing a lot of it: both what the film presents and my own struggles living in a country with no respect for people of color and their respective cultures.

I would definitely recommend giving this a watch. It is long and quiet in pacing, so plan for that in terms of company (we had a chatty houseguest : I ) and snacks. I’m not sure this will make it into the Bleak Bible, which is our list of Thanksgiving-Acceptable films, but time will tell. Sometimes the hopelessness kicks in later ala Requiem for A Dream.

May your bellies always be full!

Embrace of the Serpent Review

For starters I have listened to this track roughly 80 times prior to this writing and will probably listen another 10-15 by the time I’m done. It’s clearly not getting old anytime soon. On that alone, I would recommend giving the track a whirl.

The solo lilting guitar lick at beginning used to bother me a lot…why are you so off-beat sounding? why does your guitar sound drunk??  but it has become so addicting–much like the piano plinking in “Try It On” from Interpol.

This song has so many elements that pull you deeper under its spell, much in theme with the story the lyrics seem to be spinning. Paul Banks’ half question, half command “come on baby” beckons you (his lover, obviously *sigh*) to hear him out. The alternating closed hi hat and claps force pauses into the melody and lull you further into the track. Sharply accented guitar bleats that slide into nothingness plead for attention and are the musical equivalent of the chest pangs of the lovesick.

The true gem of this song, though, is the bridge. Working up to it, Sam Fogarino plays this beautiful cymbal riff that has an almost cowboy-western feel to it, which melts right into the crescendo. The bass line goes from a chugging slew of repeated 8th notes and blossoms into a plucky riff with an almost Latin underlying pattern, which is subtle but thrilling nonetheless. All which follows the somewhat conciliatory “you won’t find no scars on me” from Banks. That, coupled with the transition into a brighter mode leaves a feeling of “I will defeat you by embracing my flaws.”

I’ve said it before, and I’ll say it again: Sam Fogarino is the heartbeat of this group. Many of their artful chord progressions would fall completely flat without the immense texture of his rhythm section. The more I try to master his beats, the more I am astounded by his skills.

The lyrics are so contested for this song (and rightfully so…Paul Banks makes Zach Condon of Beirut sound like an enunciator) that I have a hard time diving into them. But I will say that the parts that can be understood have reached into me and will not let go. And honestly, not being able to clearly hear words can allow you to just hear what you want–other people be damned.

Here’s to another 80 listens! Enjoy!

On Repeat: “My Desire” Interpol 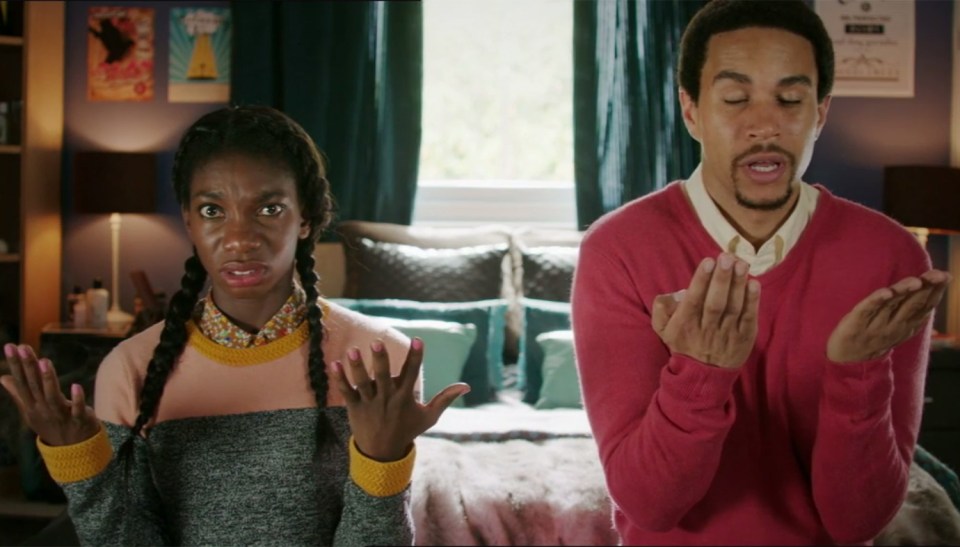 I’m on episode 4 or 5 and this show is fucking hilarious.

I don’t laugh aloud often, but when I do it is loud and obnoxious and usually well deserved. This show’s got me -rollin-.

Don’t be turned off by the mid-twenties virgin wants to get the D synopsis. I feel like anyone who’s felt awkward starting a sexual relationship will be able to relate. The class struggle jokes can be pretty on point too. I hope the rest of Season 1 turns out to be as fantastic.