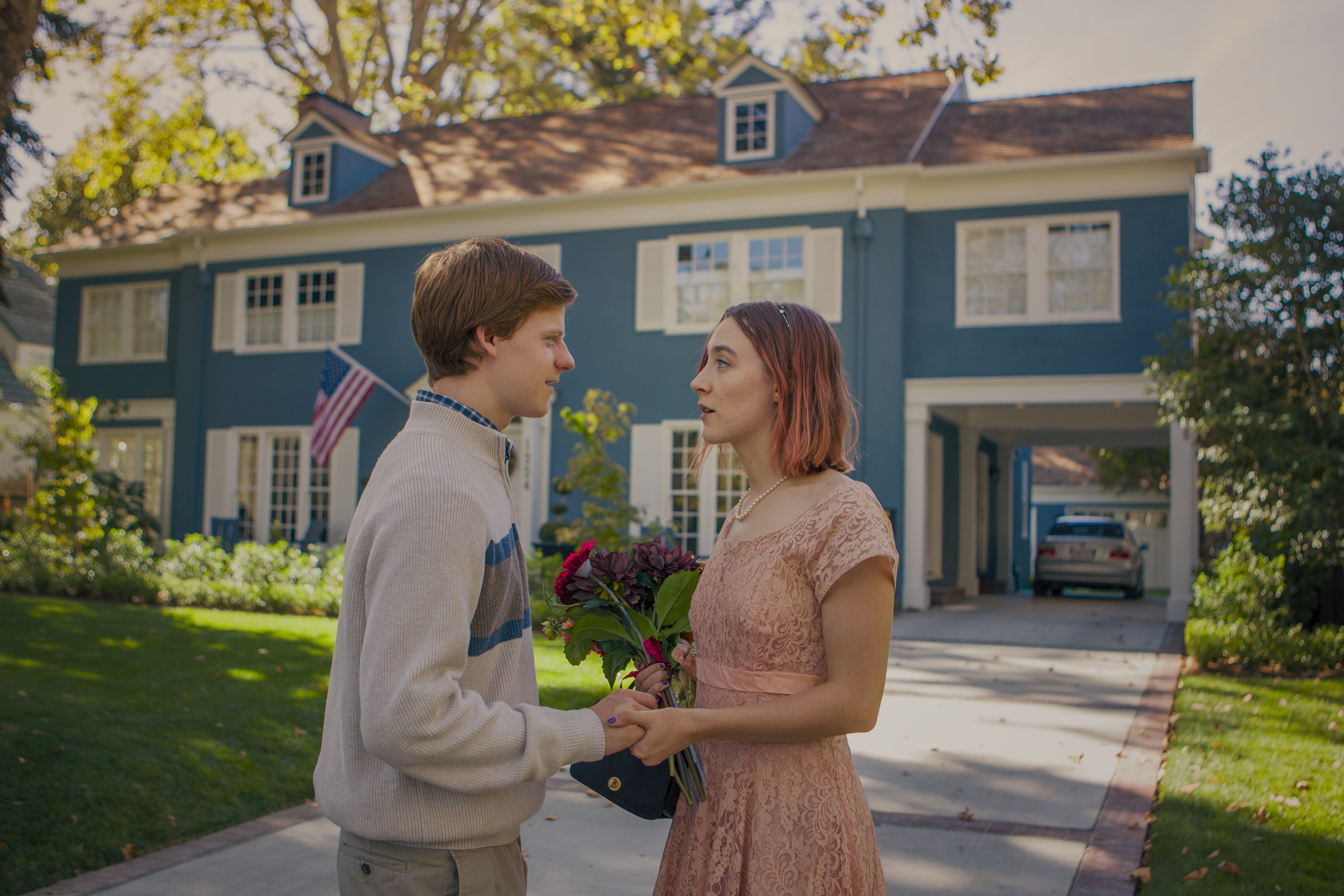 So, this movie was wild. I don’t mean a crazy teen action adventure. I mean I just watched as close as I will probably ever get to “my story” in a major film. It was a little overwhelming.

So big caveat to this whole review: I am a native Sacramentan. When my friend told me it was a coming of age movie based in Sacramento, I scream/blurted “So it’s about trying to escape?!” And of course that’s what it’s about because, truly, what the fuck else is there for a 17 year old to do in Sac but plot their escape. SO onwards…Basically, every moment my husband and I were watching this movie, we were critiquing if it was “Sactown” enough. To answer many people’s biggest question: yes, it is. Watching was like I got to visit home for $5 instead of $500. I will say though, if you did not grow up on the grid or in an adjacent suburb, this may not ring with you as much. That being said…if you are a woman born in the 80’s, born and raised in Sacramento, lower middle class, and white-ish, you will probably at least partially identify with this movie. If you are not those things, you still absolutely know “this” girl or any of the myriad caricatures of Sacramentans in this film.

My husband pointed out the relative “whiteness” of the film, so I actually want to talk about that a little bit. There are certainly some people of color scattered throughout this film, but overall it does look very white–hence, my previous “white-ish” comment. However, I will point out that this is probably *legitimately* intentional. Despite being one of the most diverse cities in the country, Sacramento has huge issues with de facto segregation. I don’t think this is a wild concept for many people to understand, especially people from large cities. However, I feel like it’s worth pointing out that in this case it is not Hollywood white washing everything, but rather a shittily accurate depiction of this place in the world. Just to give you an idea of how this plays out “big picture”: the white population in Sacramento is roughly 33% white and my suburbia high school was 95% white. Just let that sink in. This did not happen accidentally, it was very carefully planned by racist assholes to keep their schools and neighborhoods white. (Sidenote, yes it was *very fucking* awkward to be in that 5% lol/butnotlol.)

So I do just want to spend a smidgen more time talking about the scenery of Lady Bird. For non residents of the Central Valley, all these places are REAL. Like the real deal, real. I cannot tell you how crazy it is to see so many mundane parts of the painting of “home” in my mind up on a fucking giant movie screen. My husband and I basically spent half of the movie trying to stifle our “ohmygod look!!”‘s in an effort to be polite to our fellow movie-goers (because we’re in Texas and these nice folks are just trying to watch a teen coming of age movie without the damn peanut gallery). But it’s really hard not to laugh aloud when they’re talking about knifings at Sac High (a sad reality) and you, like, actually GET IT. For a frame of reference, I once played soccer against girls from Sac High. You have never seen so many yellow and red cards thrown down in a game (on both sides)–so much heated shit talking. There was a fight, there was a ponytail grabbing throw down, the refs called the game early. It was an experience. They also did a phenomenal job of recreating 2002, cd stacks galore, etc. AND! They actually did like cultural/linguistic coaching..it was so nice to hear someone say “menno” instead of “mento”–it seems stupid and small but it matters. Truly, bravo.

The meat of this movie, the interpersonal relationships, were so on point it left me feeling utterly raw. It’s a typical angsty, teen girl vs. well meaning, frazzled mom scenario. Most teen girls survive it, but man is it fucked up to watch that story you already painfully identify with happening *literally* in the place you grew up. That being said, perhaps this movie resonates most with us “escapees.” It is one thing to complain about Sac being the most boring place under the sun as a teen/early adult. It’s quite another to successfully escape. As with probably many people who finally escape their hometown blues, there is a certain bittersweetness that you don’t fully understand until you’re living it. I absolutely love Sacramento to the bone and when I visit, no matter how long I’ve been gone (I’ve been a non-resident for 7 years), I always feel like “ah, back home.” It never stops feeling like home. But at the same time, I mean it when I say you COULD NOT pay me enough to move back there–family pleading and all. If that is where life takes me, so be it; but it is the antithesis of #goals. So this is that story. To me you don’t have to be a private school student, or a native downtown baby, or even from Sacramento to relate to this story–just, once upon a time you were a semi-edgy youth trying to claw your way out of drudgery.

I am obviously way too biased to say objectively whether or not this movie was good, but I will say I thoroughly enjoyed it–tears streaming and all.